immie Olusola is the radio host and hype man doing things a little differently. There aren’t many, after all, who can say they’ve started a clothing line and also host a  radio show on one of Nigeria’s top radio stations the Beat 99.9 FM. His work isn’t as lauded as some of his peers but he is consistent and a fan favourite. In this sit down with BNS, he paints a frank picture of what it’s like to be living in Lagos today and traverses subjects including misconceptions about the industry, what it really takes to ‘blow’ and what growth means to him.  Citing music as a lifelong influence, reeling off  names of artistes who shaped his love of music: from UB40, MC Hammer, Bobby Brown, Soul II Soul, Boy George, Madonna, Prince, Janet Jackson, to Bon Jovi .  And despite the roster of prestigious brands that he’s worked with – which along with the Beat, also includes Hennessy, Budweiser and more, he still believes he has a long way to go and more to offer his fans.

Jimmie is evolving and we can’t wait to see what he does next. BellaNaija Style  learns more about his childhood, some of his new ventures and more

When did you first fall in love with music?

Music has always been an instrumental part of my life. I first fell in love with music when my parents separated in 1990, at the age o f 5 . It served as my escape, a safe haven and outlet to be able to channel and experience my emotions freely. My mum served as a huge influence as well with her vast collection of vinyls which included, UB40, MC Hammer, Bobby Brown, Soul II Soul, Boy George, Madonna, Prince, Janet Jackson, Bon Jovi etc. Locally tho, Esse Agesse,  Ras Kimono,  Onyeka Onwenu,  Majek Fashek, Shina Peters and Femi Kuti were ever present. Michael Jackson was always a favourite growing up, I think even at a young age I appreciated the fact that he created an identity for himself that was uniquely him from his voice, dance, wardrobe and all around stage presence.

Can you tell us how you got started on radio?

I started on the Radio at The Beat 99.9 FM Lagos in October 2009. After quitting my Job as Presenter/Producer of Godwin Dudu-Orumen’s Best Of Football Show on NTA 2 channel 5, I wanted to get on TOP Radio 90.9fm but I never got a chance until my friend Seun O (@Specialnigerian) introduced me to Beat FM and after one interview with Deji Awokoya (GM) and Chris Ubosi (Owner), I was employed immediately as Head of the Sports Desk with my own show “Sports Extra with Jimmie” which also aired on Classic FM 97.3. and that in turn opened up the room and opportunity for growth, which eventually led me to TV.

How do you describe your personal style?

I would say my personal style is “Dapper with a sense of street sensibility“. As a kid I always loved going out because it meant, I would get a chance to play dress up and look dapper.  There is just something about how a well tailored suit, makes me feel . I would say my personal style is based on the philosophy – “Dress how you want to be addressed” but also “Elegance is not about being noticed, it is about being remembered”. For me it’s about keeping it simple but significant, simply put, my personal style is appropriately tied to the occasion but I “Own It” regardless of the occasion, leaving them with something to remember. Some of my Style Influences – P. Diddy, Wiz Khalifa, Dbanj, Nick Cannon (Wild n Out outfits are urban classics), ASAP ROCKY and most recently Ebuka Obi-Uchendu and Denola Grey.

What common assumptions would you change about your industry?

Hmmmm an assumption I would change about my industry, one would definitely be the idea that “He with the most money wins” but actually it’s more about talent, opportunity and consistency. Obviously money does influence a lot and can get you in the door, we won’t act oblivious to that fact, but it can not sustain your stay or growth in the industry if you do not really put in the work or actually try to grow your skill set and have a strategy in place.

We have people like Davido in our industry that people always attribute his affluence to him becoming successful but his work ethic is undeniable and he has definitely stayed consistent. They make sure they work extra hard so no one can say it wasn’t earned and deserved.  I just truly believe the right strategy, coupled up with talent can open up riveting opportunities. It’s about finding your niche and knowing your “market”.

Also, another big assumption/ misconception geared more specifically to the hype industry is that, there’s no skill or art to hype, which couldn’t be further from the truth. Hyping requires a lot of discipline, energy and synergy.  The vibe/mood of an event or artist depends on if they are in sync with their audience and it is the job of the hypeman to provide that vibe and support, while making sure not to be intemperate.

Growth is inevitable, but it also has to be intentional as well. I have always known that my talents were not limited to one particularly skill set and I have always tried to explore and utilize my other gifts.

As someone who is ‘in the mix’ so to speak – with the nightlife in Lagos and lives in the capital, what are your thoughts on Lagos’ nightlife today?

For the last decade, Night Life in Lagos has evolved so much and as Banky W rightfully said “Ain’t no party like a Lagos Party”. Lagos Nightlife is more than just a party it’s an experience, it is an energy you can’t really get anywhere else, which is why it has become a major part of the Lagos Attraction. Everyone wants to come and feel that energy for themselves… we even have the “DETTY DECEMBER” movement.. Lagos Nightlife is comparable to global destinations such as Las Vegas, Miami, New York, London, Paris, etc. Obviously now with the COVID-19 pandemic we are going to see a lot of major adjustments and changes but the energy is definitely here to stay and it’s something as a culture we should bask in.

Oddly enough because going out is a big part of my job, I usually prefer a lowkey, intimate, chilled hang out with friends or just a night in with my Playstation, a good basketball/football game or good ol’ Netflix and chill. Though on a good night, some of my GO-TO spots in Lagos, and I’ll set it up for you guys:

You’re also known as a hype man. How does this work?

Well, as the name implies, a Hypeman’s responsibility is to raise the energy levels of an event or an audience, alongside a DJ/Band/Artist using his/her words rhythmically in line with the music. Hype is a very important part of the entertainment culture (especially in music) , it helps sets the pace of an event and create a larger than life reality/persona. There is a whole art to hyping that requires timing, i.e knowing when to engage, when to interject, how much time you spend on intro, call -and – response etc, stage presence, crowd interaction and also energy levels- you don’t want to exhaust yourself too soon, you have to have enough energy to carry the crowd through the whole event. You want to be able to figure out how to keep the energy up, without tanking yours and that’s when you come up with a set that involves different activities e.g a DJ set, the audience as part of the show i,e dancing, sing-a longs etc.

The “hype industry” has also grown immensely from when I started almost 10 years ago and It’s great  to see how much more its being appreciated and the opportunities and possibilities of growth that can derive from hype.

When did you first become interested in expanding your repertoire?

Growth is inevitable, but it also has to be intentional as well. I have always known that my talents were not limited to one particularly skill set and I have always tried to explore and utilise my other gifts. I have been in the industry since I was a child, in that space of time I have acquired so much knowledge and had the opportunity to work with so many different people and companies, Having started out on TV as a kid, on SPEAK-OUT (debate show) and then Sports presentation (Radio/TV), Music, producing tv shows etc .  I also took up acting in 2012 for Tola Odunsi’s The Island and made my movie debut on set of When Love Happens Again directed by Seyi Babatope in 2015. So for me, one avenue is always just another stepping stone for me to do better and become more, never the last stop. That is the only way to be successful, Always have a mentality of  learning and growth. The sky is not the limit, your mind is, so you have to open it up to limitless possibilities while trusting in your abilities and resilience.

Tell us about your new ventures.

A few things I’m currently working on that I can openly share right now;  I have my TV show on SuperSports in partnership with Budweiser, “KINGS OF FOOTBALL”.  I am launching “8TH WORLD MEDIA  & ENT“, an Event and Talent management company . 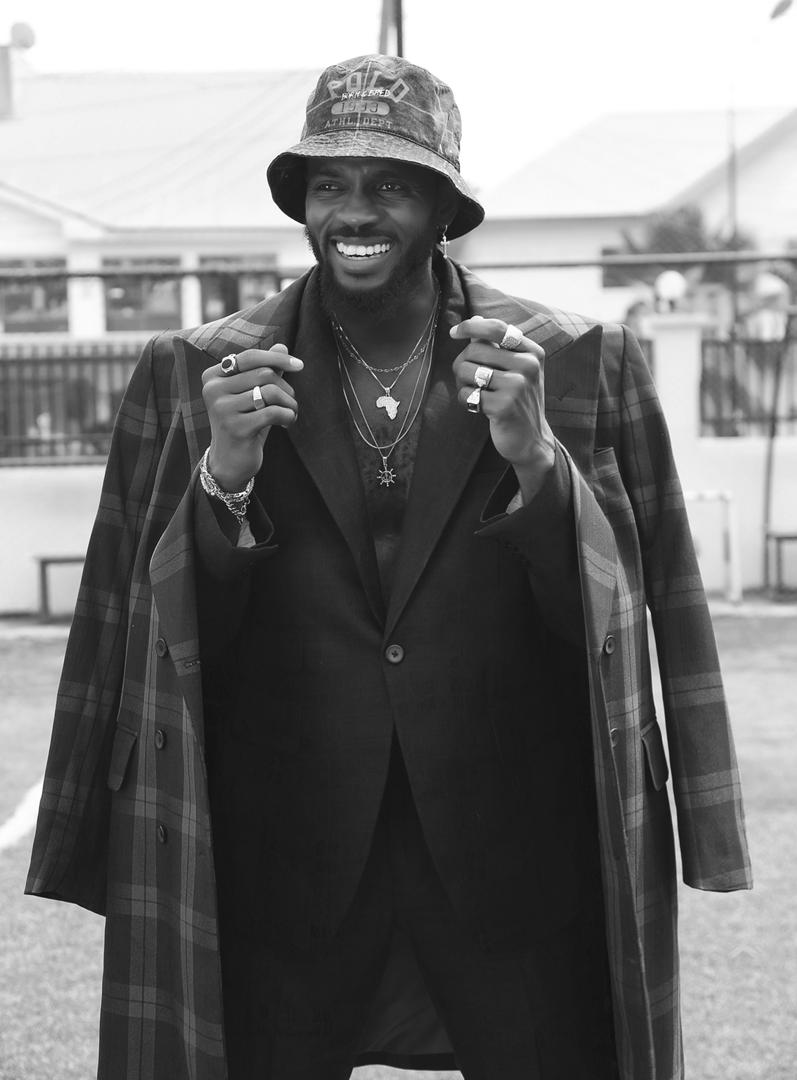 I’ve also launched AFRO-HOUSE PARTY (@afrohouse.party), which is an experiential pop up party to celebrate afrobeats/pop music across the world. I have a clothing line in partnership with Jimmy Lawanson, called J’apparel (@japparelng), we recently just released a new collection of hats “THE JUNGLE SERIES”.  With the sudden change of our climate and Life as we know it (the on-set of  COVID-19), we have all had to adjust and re-strategize, so I have also been working on some online content which will be coming very soon, as well as an IG LIVE show “BATTLE OF THE ALBUMS” with my fellow hype-man, Shody, where we celebrate artists and albums that have paved the way for the growth of Afrobeats music as we know it today. Along with my partnerships with Hennessy ( Hennessy artistry) and Budweiser.

Obviously money does influence a lot and can get you in the door, we won’t act oblivious to that fact, but it can not sustain your stay or growth in the industry if you do not really put in the work or actually try to grow your skill set and have a strategy in place.

Check out more images below: 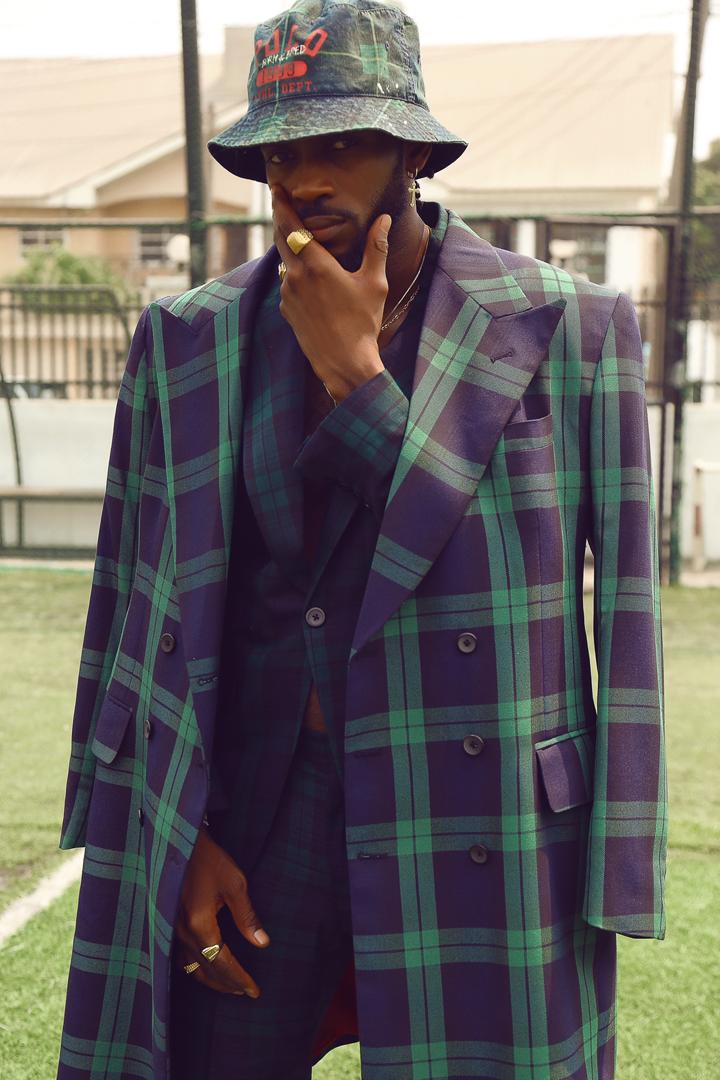 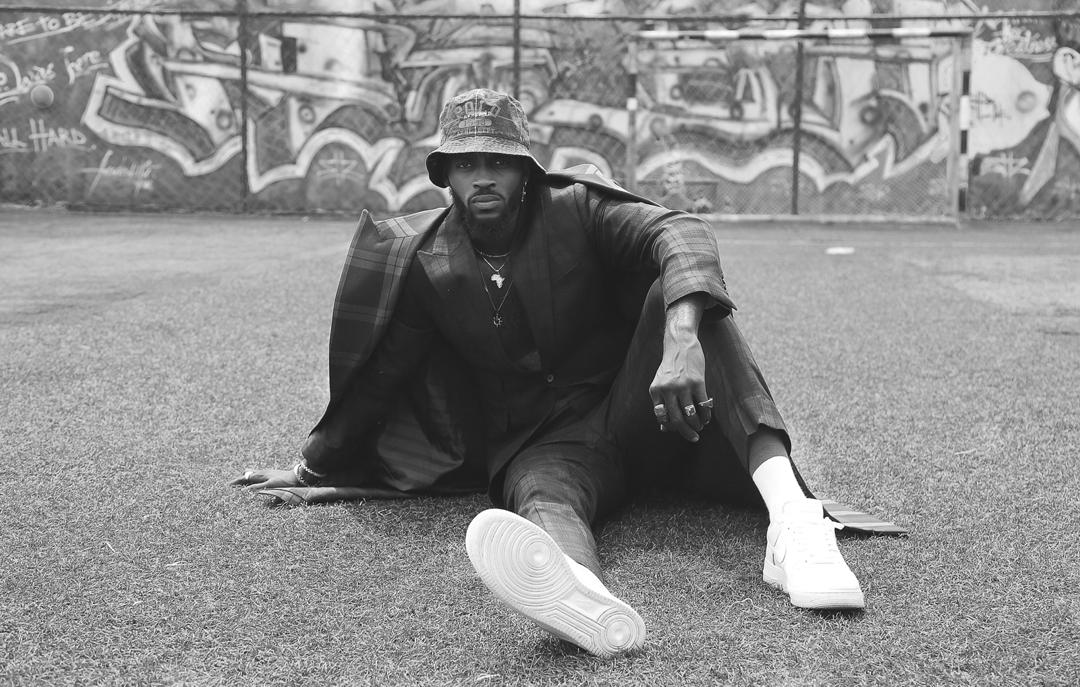 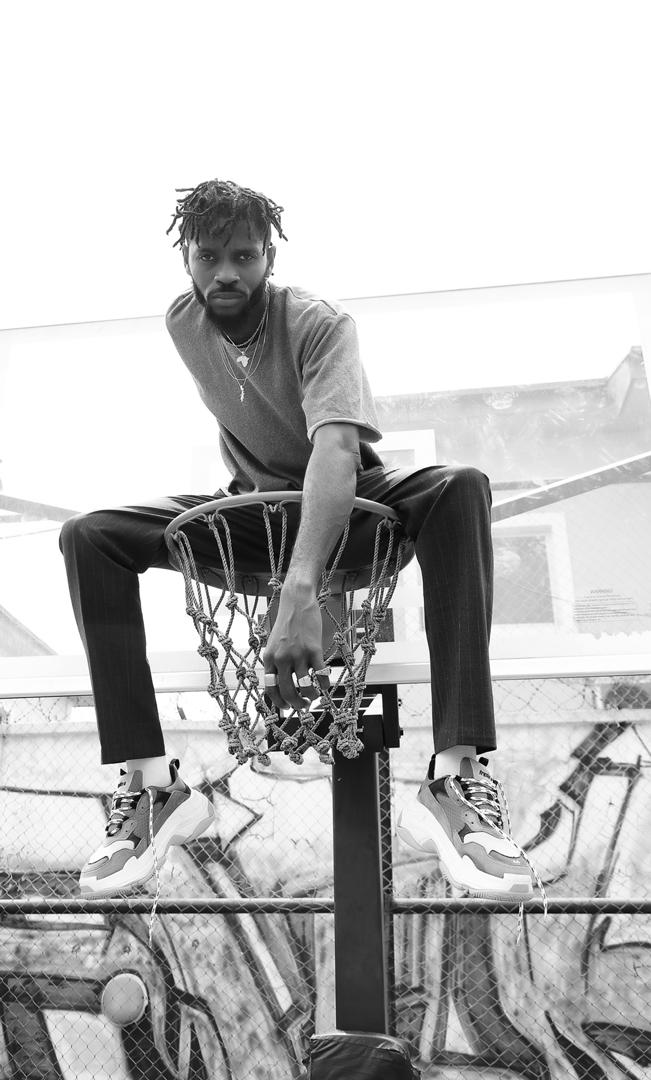 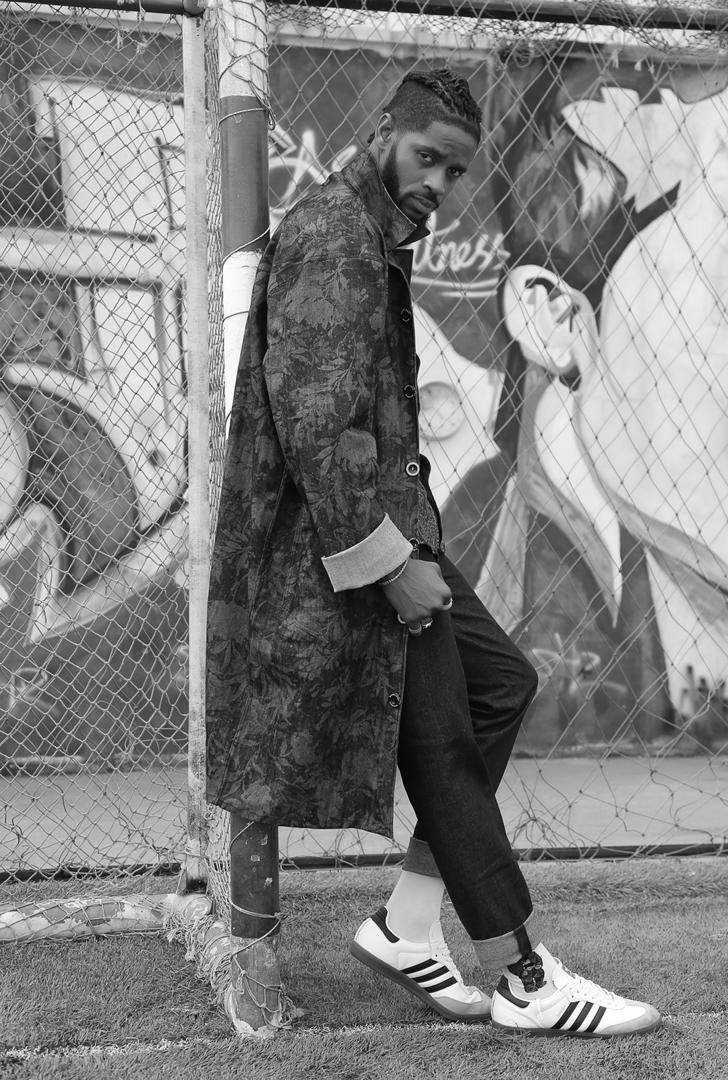 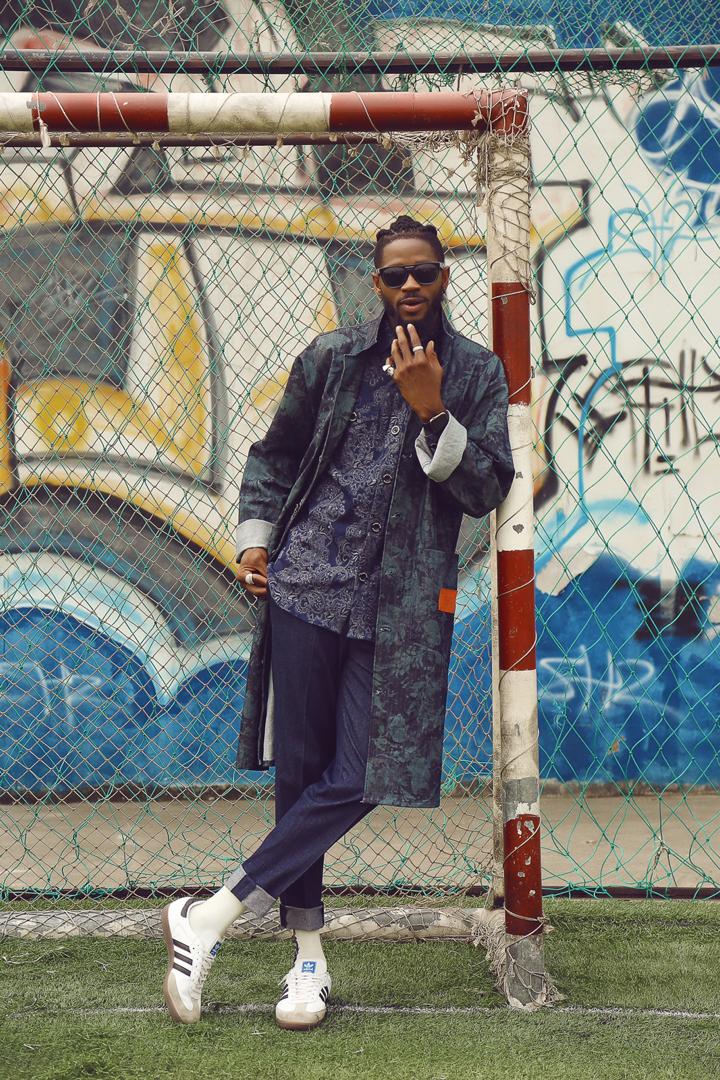 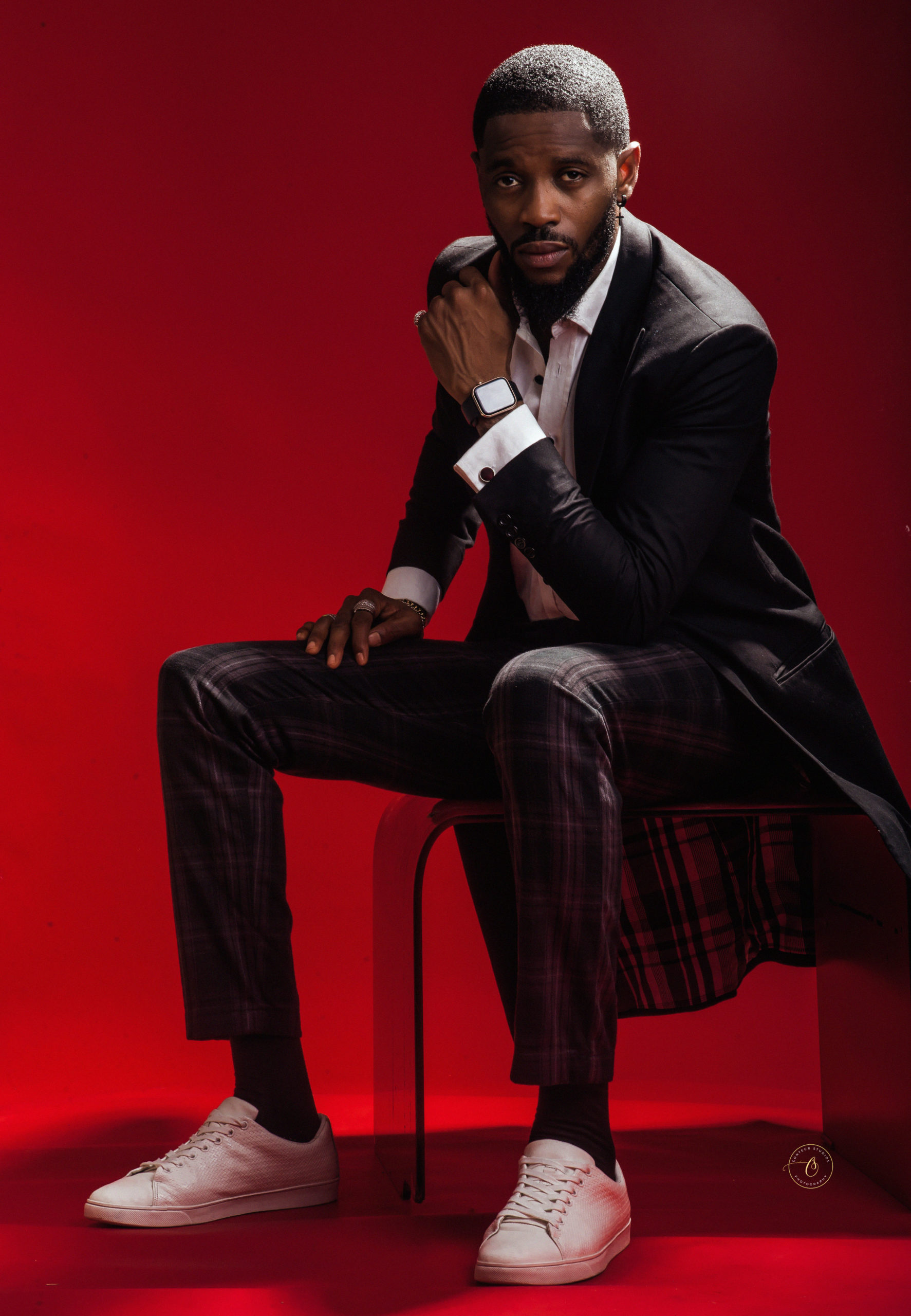 Concept- “The Ball is in his court”