Every cent matters to Kim Jaemin, a cab driver in virus-ravaged New York City, whose diet has been reduced to instant noodles despite working 14-hour shifts, seven days a week.

Since the coronavirus pandemic emptied the streets of passengers, the 58-year-old from South Korea has been living on about $65 a day. He buys near-expired, discounted food that he rations to last the week. Two meals of the day consist of the cheapest brand of ramen noodles he can find. “Forget about nutrition,” he says.

On May 2, of the seven total passengers he picked up, five did not tip. The other two tipped him less than $3 each. While most of his fellow cab drivers have quit—either because they fear getting sick with COVID-19, which has killed dozens of their colleagues, or because they feel it’s useless to scour a deserted city for riders—Jaemin says he has no choice but to work more. “I have to make every possible penny, nickel and dime,” says Jaemin, who lives alone in Queens and scribbles every fare and tip he gets into a notepad.

“The only way I could survive,” he adds, “I have to work every day.” 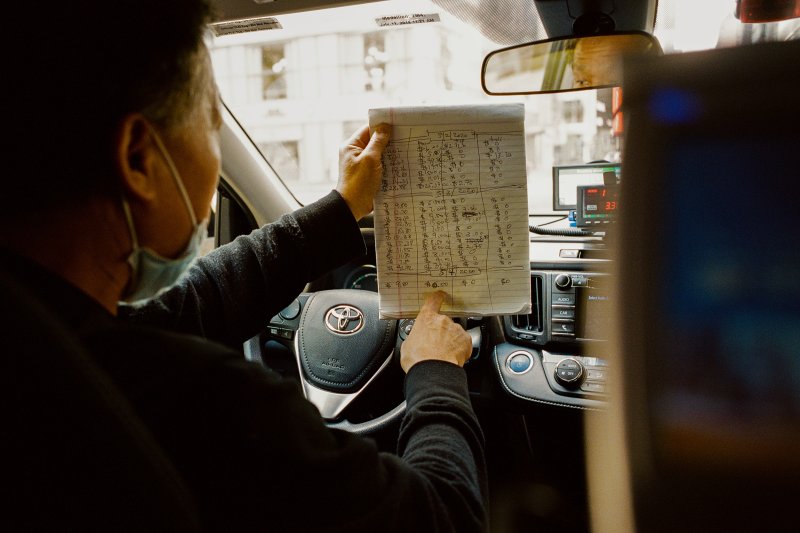 That’s the reality for hundreds of New York City’s taxicab drivers who remain on the road, searching for scarce fares as ridership hits record lows. The number of cab rides in the city fell from about 506,000 during the first week of March to roughly 28,500 during the week of May 4, according to the Metropolitan Taxicab Board of Trade (MTBOT), the city’s largest taxi group, which represents more than 5,500 yellow cab owners. The city’s Taxi & Limousine Commission (TLC) did not disclose its data, but the MTBOT, which represents about half of the entire taxi industry, says fares across its fleets have dropped about 94%.

“It’s a staggering number that we’ve never experienced before,” MTBOT spokesman Michael Woloz says. “Theaters are dark. Restaurants are closed. All of the traditional fares have disappeared.”

Outside of Grand Central Terminal at 9 a.m. on a recent Monday, cabs are lined up, but most are waiting in vain. The world-famous transportation hub is near-vacant, and silence has replaced the usual clamor of rush-hour traffic. “It’s like a movie right now,” Mohamed Eleissawy, a 63-year-old taxi driver, says of the abandoned metropolis. 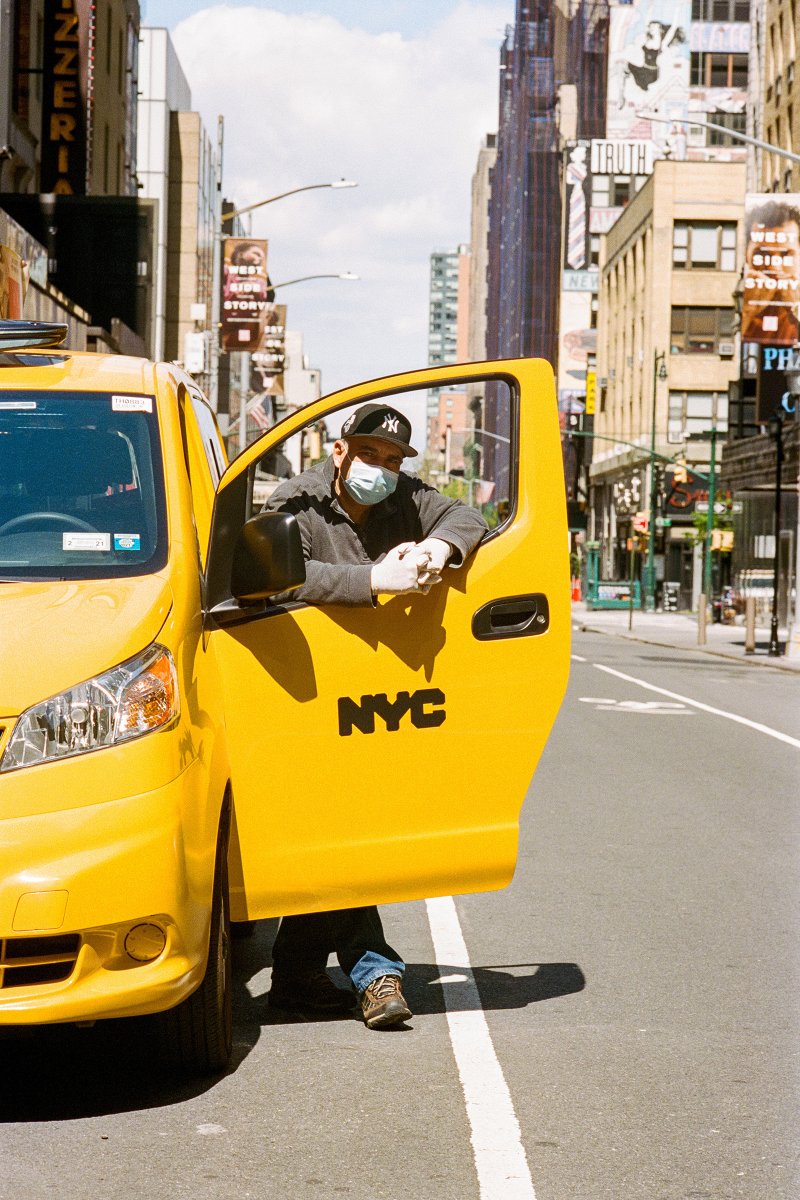 Mohamed Eleissawy, 63, Taxi Driver, Manhattan. The father of three has been a taxi driver for about 30 years. He’s gone from working five days a week to three since the lockdown started, often only giving four or five rides a day. After every stop, he wipes down the seat belts, doors and credit-card machine. “I love Manhattan, but I feel bad for Manhattan,” he says. Andre D. Wagner for TIME

Amid a drop in fares, thousands of drivers have stopped working. In the first week of March, about 3,660 taxi drivers were still on the road, according to the MTBOT’s tally. Now, the group has counted fewer than 600. Thousands have signed up to deliver meals to sick or elderly residents for $53 per route as part of a new citywide program meant to help vulnerable populations and earn drivers more cash. By repurposing their jobs, the TLC said these drivers are “helping us to ensure that no one goes hungry.” But like Jaemin, many of the city’s cab drivers are inching closer to severe hunger themselves.

A new survey by the New York Taxi Workers Alliance (NYTWA), which represents about 23,000 taxi and rideshare-app drivers, found more than 82% of drivers have run out of money to buy food or say they will soon reach that point. Out of 919 drivers surveyed, more than 700 said they were unable to pay their rent or mortgage in March and April. The Independent Drivers Guild, which represents more than 80,000 for-hire drivers in the city, said 45% of its members in late April had asked for help securing food. Nearly 70% of the guild’s drivers said they were unable to make rent or mortgage in April, with more saying they won’t be able to pay in May. 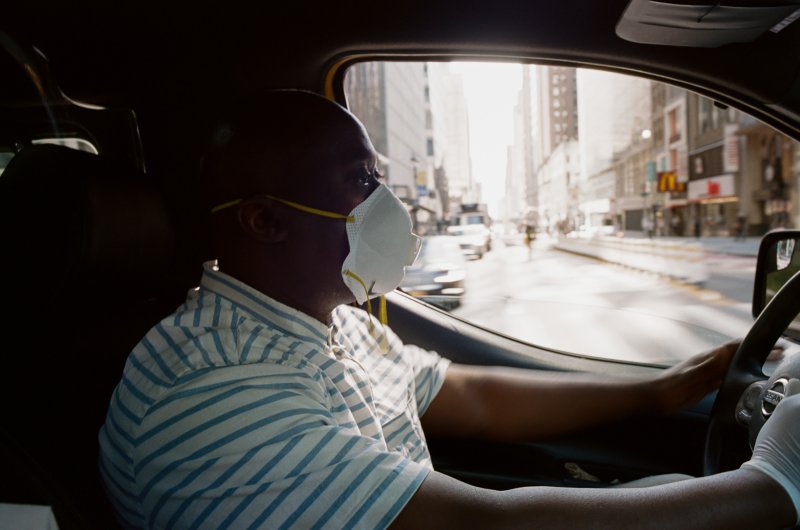 Jacob Smith, 49, has been a taxi driver for almost two years in New York City. “It’s dangerous,” he says. “My brother is upset that I even go out and try to work. But I’m going, and this is one of the things that’s difficult. You have to make ends meet.” Andre D. Wagner for TIME

Desai fears the pandemic will be a “breaking point” for many drivers already suffering financial hardships due to competition with ride-sharing apps and crushing loans they took out to buy medallions, which are permits the city requires to own a yellow cab. In 2018, at least eight professional drivers in the city died by suicide, which advocates blamed on crippling debt. The industry had been showing signs of improvement, especially after the spate of suicides grabbed the attention of local lawmakers, according to Desai and Woloz. Then the pandemic hit.

“The yellow cab is the quintessential symbol of New York City,” Desai says. “But these are men and women, who for every time we think the bottom has finally settled in, it falls out all over again.”

Now, the futures of cab drivers are more uncertain than ever. As new COVID-19 cases slowly drop in New York City, advocates are hopeful the century-old taxi industry will rebound as it did after the Sept. 11 terrorist attacks and after Superstorm Sandy in 2015. “New York City is the biggest and best,” TLC spokesman Allan Fromberg says, “and we expect the future to be bright again in time.”

Desai and Woloz say yellow cabs could even become a vital part of the city’s recovery, transporting both people and goods as some commuters avoid crowded subways. “They know how to navigate through a crisis,” Desai says. “Through every city disaster, drivers have kept working.”

But predictions among some in the workforce are grim. “The coronavirus is the last nail in the yellow cab coffin,” says 36-year-old driver Khurshid Ahmed, who owes $370,000 on his medallion loan. “I am tied to this job until my last breath,” he adds. “I am not seeing any future.” 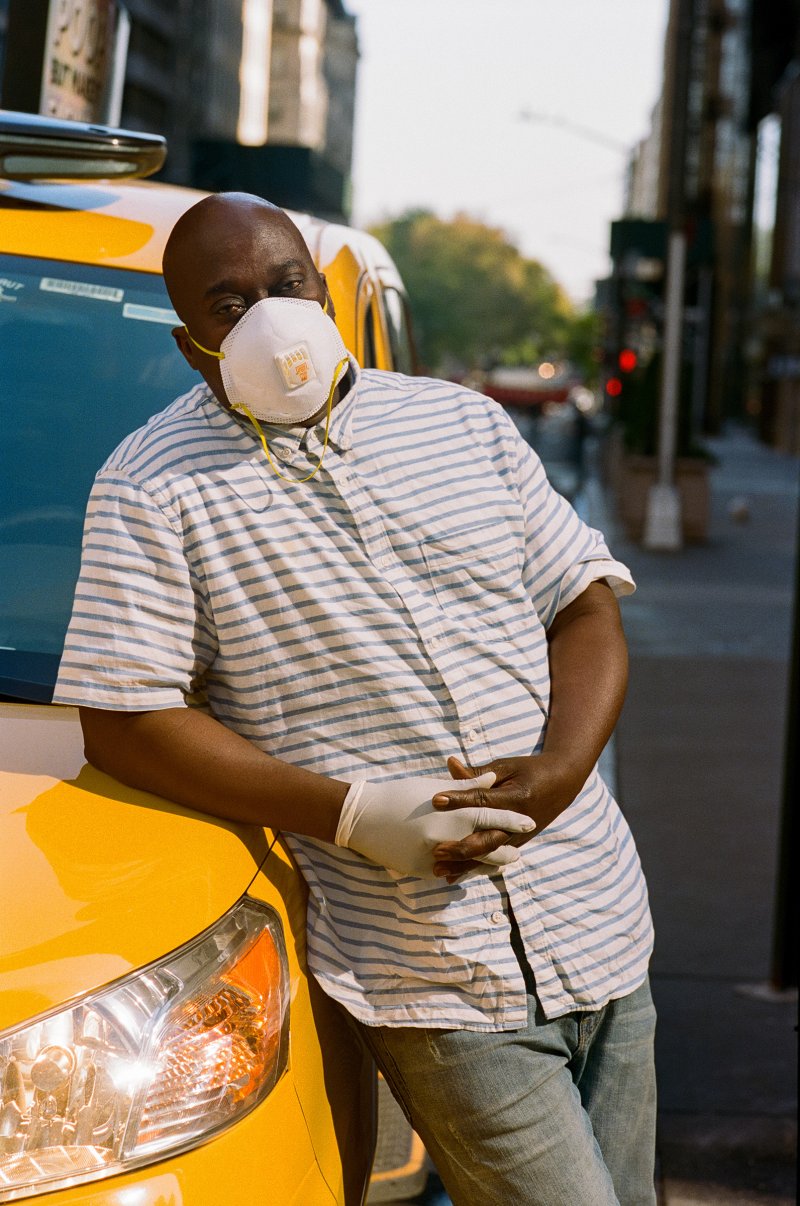 Taxi drivers, like Jacob Smith, pick up many passengers from hospitals and have to buy their own face masks, sanitizers and gloves. “I’m more cautious,” Smith says. Andre D. Wagner for TIME

Jacob Smith, 49, from Ghana, agrees. Standing on 5th Ave., which was devoid of pedestrians at what used to be rush hour, the yellow cab driver and father of two has little hope. “When the doors open, I’m not sure people will come back,” he says. Smith is set on changing careers as soon as someone, anywhere, will hire him. “New York is famous for the cab,” he says, “but corona will be the end.” 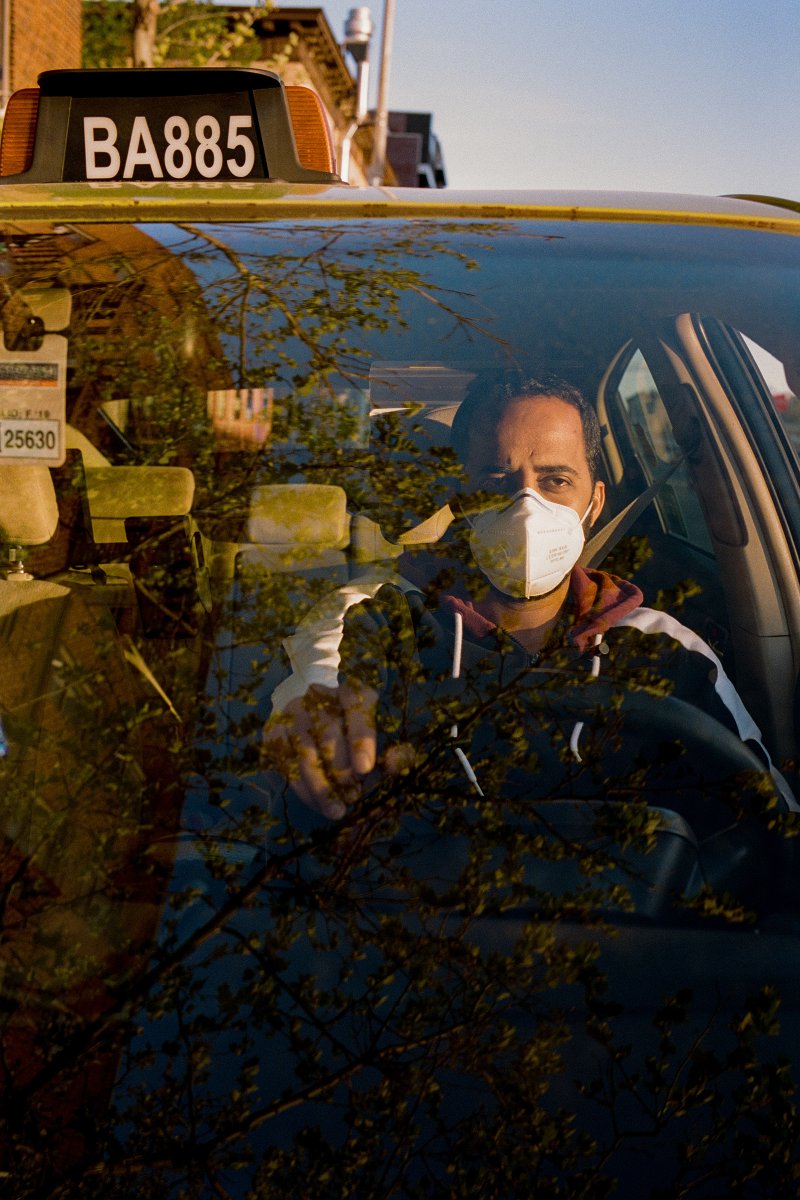 Almontasir Ahmed Mohamed, 33, is a taxi driver and engineering student in Brooklyn, who came to the U.S. from Sudan. He says many of his customers come from hospitals. “I’m just praying five times every day to keep this virus away, and for my family,” he says. “I applied for unemployment over three weeks ago after I stayed home for almost a month. I haven’t heard back so I started working again.” Andre D. Wagner for TIME

Almontasir Ahmed Mohamed, 33, is also weighing a career switch after driving a yellow cab for six years. He’s studying engineering science at a Brooklyn community college part-time and wonders when he will see his family again in his home country of Sudan. “I stopped thinking about my future,” he says. “The virus has made me confused about my plans.”

For Jaemin, though, the U.S. has been his home for almost 40 years, so going back to South Korea is not an option. Neither is giving up his cab, because driving is all he has known. “This is my job until I die,” he says. “There is no other job I could do.”

But as he jeopardizes his own health by getting behind the wheel, Jaemin says at least one passenger a day will make a racist remark, telling him to go back to his country or speak better English. “I don’t think the city respects us like doctors and nurses, the police, the subway workers,” he says. “We are essential workers, too.”

“Without the yellow cabs,” he adds, “the city cannot move.”

With reporting by Paul Moakley 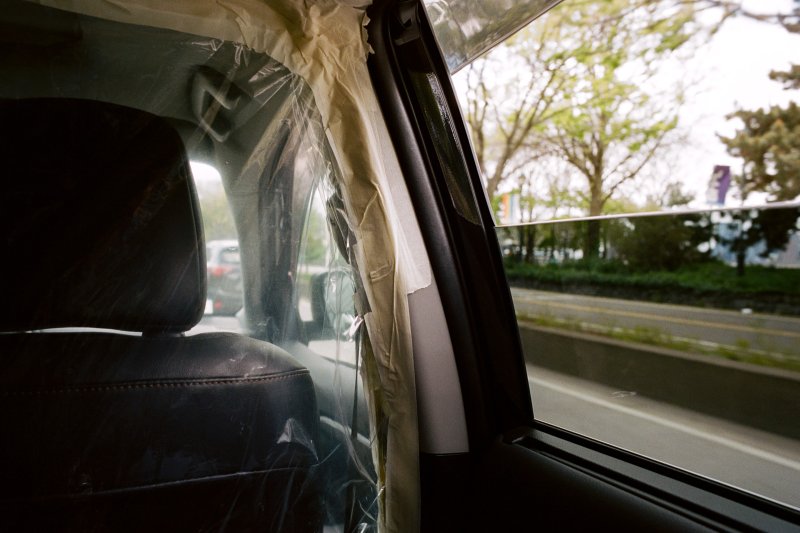 A handmade plastic partition in an Uber in New York City on May 2. Andre D. Wagner for TIME