Peruvians cry out for oxygen as coronavirus takes its toll

People collapsed in the street, others dragging desperately ill relatives to the door of hospitals that won’t admit them, and distraught children asking why their parents were left to die. These are terrifying daily scenes of the coronavirus outbreak across Peru, and experts are worried things are going to get even worse.Oxygen, one of the most important weapons in keeping coronavirus patients alive, is in short supply and has become a powerful symbol of the chaos in Peru. Desperate citizens have turned to a burgeoning black market, with tanks listed for sale at exorbitant prices on social media and e-commerce sites.One of those seeking oxygen was Carlos Roque Rojas, 41, whose 81-year-old mother developed a fever and breathing difficulties. He looked all over for oxygen for her but was ultimately unsuccessful. “My mother was abandoned,” he told CNN. “The demand for oxygen was too much.” 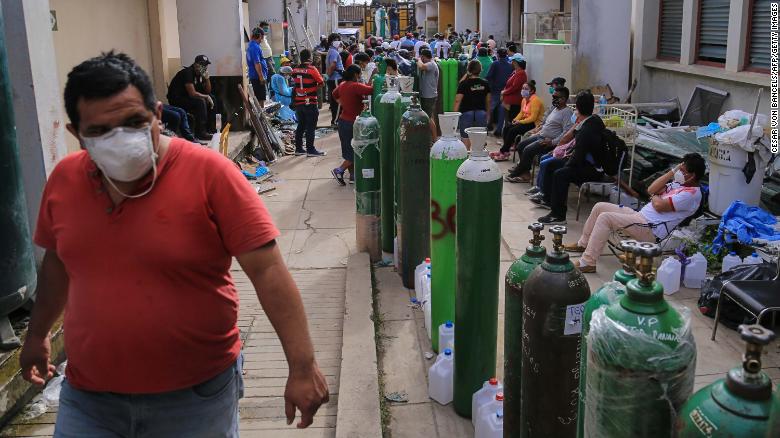 Shortages have led to a booming black market in oxygen.

Roque, who lives in the Loreto region in the Amazon Basin, described people dying right next to him at a hospital, collapsing in front of his eyes. Shortly after, his mother was dead.Roque’s experience illustrates the chaos the pandemic wrought on the region. Two doctors had told him that his mother had the coronavirus, although tests after she died came back negative and the cause of death was recorded as pneumonia. “I don’t know what to believe,” Roque told CNN, but it was clear to him that finding oxygen would have helped her live.He said it was “incredible” the country was not prepared for a pandemic. “They need to improve our health system,” he said. “They need to improve the oxygen plants.”Since Roque’s mother’s death on April 30, the virus has tightened its deadly grip on Peru, which now has the second-highest number of cases in Latin America after Brazil. According to the Johns Hopkins University database, Peru has reported more than ​183,000 cases of Covid-19 with ​more than 5,000 fatalities.The coastal city of Lambayeque is one of the hotspots, and Marcela Puicón, 30, is struggling to source oxygen for a stricken family member. 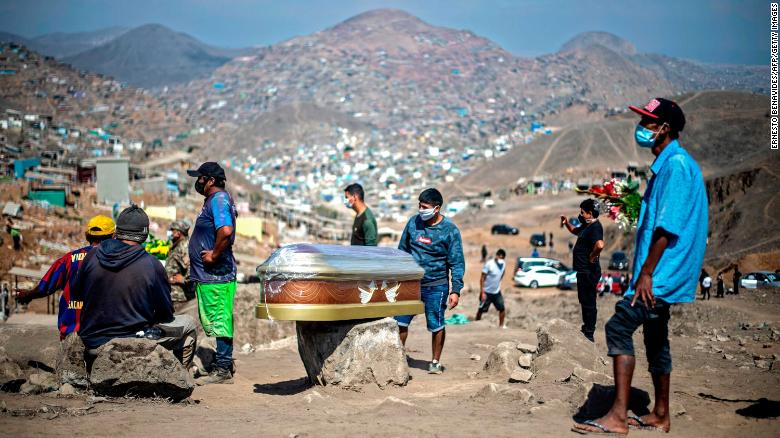 Experts predict the situation will continue to worsen.

Puicón’s 60-year-old father is fighting pneumonia after becoming infected with coronavirus and also has a pre-existing lung condition. Puicón and her six siblings decided to treat their father at home, but none of them have been able to work due to ongoing lockdown measures and it’s a daily struggle to provide medicine and oxygen due to a lack of income​.”I feel helpless, angry and furious, I feel like my hands are tied,” she told CNN. “My father is sick and we can’t afford something that is so essential for him to survive.”

On Thursday, Peru’s President Martin Vizcarra acknowledged the public outcry and announced emergency measures to increase production and access to oxygen for medical purposes, and declared the gas a strategic health resource.”We are giving the Health Ministry the resources to buy the amount of oxygen we need at a national level to treat patients, established by our technicians,” said Vizcarra at a press conference. “We are assigning 84 million soles ($24.5 million) to the Health Ministry to buy the oxygen supply needed on a national level.”Vizcarra also recognized problems with distribution and a shortage of cylinders themselves. “The same decree also establishes the transfer of 11 million soles to build oxygen networks and for maintaining oxygen plants in Lima and the regions,” he said.Peru was one of the first nations in the Americas to take strict preventative coronavirus measures, such as stay-at-home orders, curfews and border closings. 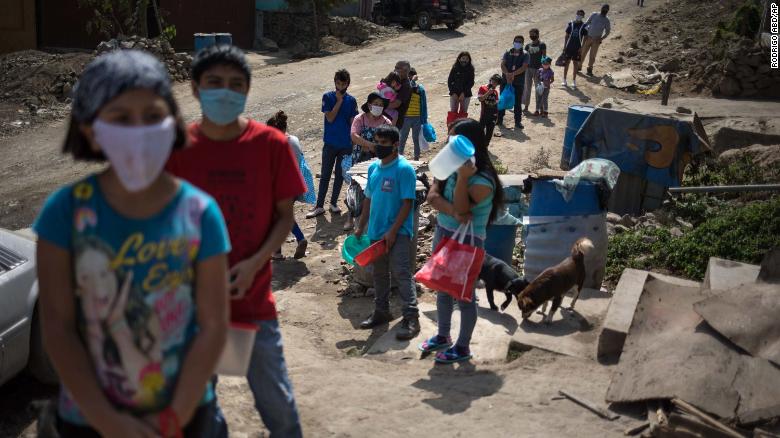 However lockdown measures failed to hold. Many of Peru’s poor have no choice but to venture outside their homes for work, food or financial transactions, leading to crowding in markets, on public transport and outside banks.More than 30% of ​households live in overcrowded conditions, said Kristian Lopez Vargas, a Peruvian economist and assistant professor at the University of California, Santa Cruz, and 72% work in the informal sector, according to Peru’s National Institute of Statistics and Information, going out each day to earn enough money to survive.”[Peru] has strengths but also some of the weaknesses we are seeing in other countries in Latin America,” said Marcos Espinal, Director of Communicable Diseases and Environmental Determinants of Health at the Pan American Health Organization (PAHO).These include under-investment, with Peru historically spending less than the 6% of GDP on public health recommended by PAHO, said Espinal, despite efforts to dedicate more resources to the sector in recent years. The country spent 3.165% of GDP on public health in 2017, according to the World Bank.Peru also has less than two hospital beds per 1,000 people, which is insufficient, said Espinal, but it’s not clear what has caused the issue of oxygen shortages. “It’s difficult to give you that answer,” he said. “At the end of the day there might be several factors.” 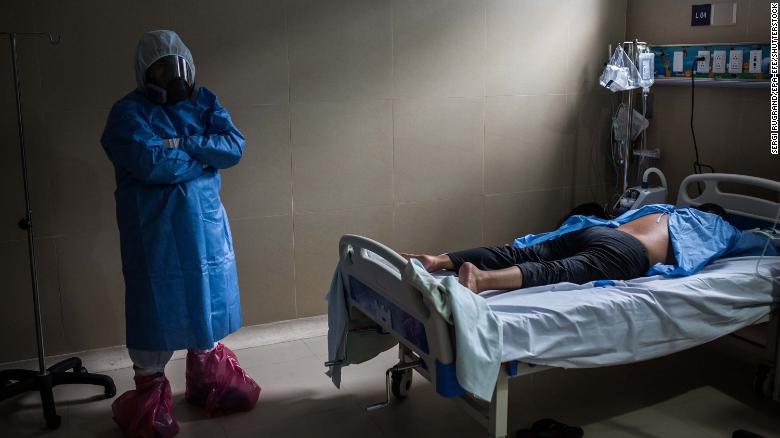 What is clear is that the oxygen shortage is critical, and it’s getting worse, said Javier Gallardo, who runs Oxígeno y Derivados, a Lima-based company that distributes oxygen treatments to patients at home.”Demand from hospitals and health clinics has multiplied by four or five because coronavirus patients need large quantities of oxygen for their treatment,” he said. Shortages are affecting gas cylinders and oxygen itself, Gallardo told CNN. “Unfortunately we are running out of stock,” he said, and the company is struggling to maintain supplies to coronavirus patients as well as those with other conditions such as chronic obstructive pulmonary disease and pulmonary fibrosis.

Despite the demands, Gallardo’s company hasn’t raised its prices, he said, unlike sellers on the black market.Gallardo says it’s a “mystery” where the black market oxygen comes from, but he has spoken to clients who say that cylinders that used to sell for 1,200 soles ($353), which is what he charges, now change hands for 5,000 soles ($1,470) each. “It’s outrageous,” he said, adding that severe or critical coronavirus patients can use one cylinder of oxygen every 6-8 hours, or four per day.”The demand for oxygen is critical, and from the start of the pandemic there was no plan to face this problem, we need to take into consideration that the current demand is around 50% higher than normal,” Leonid Lecca, executive director at NGO Partners in Health Peru and lecturer at Harvard Medical School, told CNN. 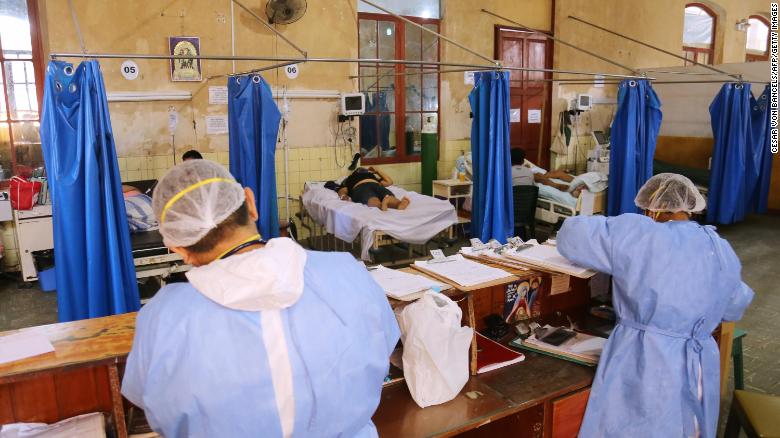 Peru’s health system has been overwhelmed during the pandemic.

In response, communities across the country have been organizing to try to source oxygen.In Iquitos, the capital of the Loreto region in the Amazon basin, Father Miguel Fuertes, Administrator of the Apostolic Vicariate of Iquitos, launched a fundraising campaign to help those in need. “There were a lot of patients and there was no oxygen for them, hospitals collapsed and you could see desperate people running around in the streets with oxygen tanks,” he said.

Fuertes told CNN his fundraiser has so far received 2 million soles ($588,544) and he has managed to buy three oxygen plants with the money, but there are still shortages in the area.Father José Manuel Zamora Romero, the parish priest in ​Lambayeque in northern Peru, also started a campaign called #ResisteLambayeque to provide food for those in need and source oxygen tanks and medicine for those that contracted the virus. 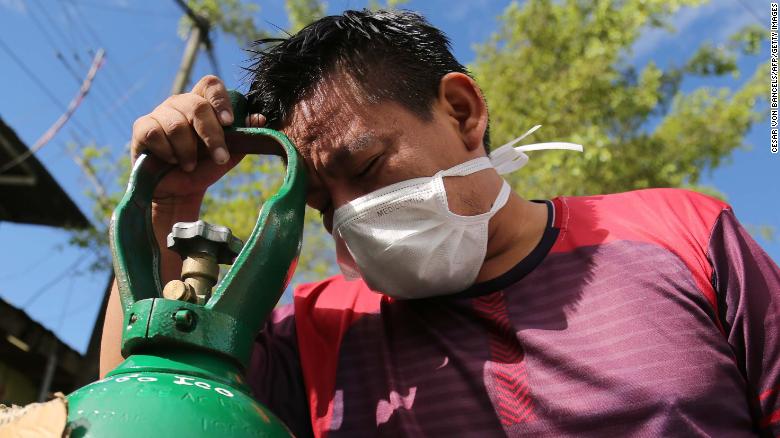 Oxygen is one of the most important weapons in fighting coronavirus.

“Hospitals do not have the capacity to treat these patients, there is no oxygen and many of them die due to the lack of it,” Zamora told CNN. “So far we have bought eight oxygen tanks, they are so expensive. None of them cost less than 4000 soles ($1,175).”Zamora’s campaign has received support from celebrities such as national soccer team star Paolo Guerrero and he donated one of the oxygen tanks to Puicón to help her 60-year-old father to be treated at home, they both told CNN. ​

But the other issue is paying for refills, that is if there is any oxygen available at all. “We need to fill up the tank every day and these days due to the lockdown we can’t work and provide for the costs,” said Puicón, who would need to pay 170 soles ($50) for a refill. “Oxygen is sold out almost everywhere and the prices keep increasing.”Gallardo, from the oxygen distribution company, said the main problem is not making more medical oxygen, but a shortage of cylinders themselves. Normally people send empty cylinders to be refilled straight away, but many patients are holding on to them as a precaution given the current shortage, he said. “Step by step we should move to safer and more efficient oxygen supply systems,” said Gallardo.But people like Puicón need help right now with resupplying her donated oxygen tank. “Every day we call one place, another place and we try to find the money,” she said. “This situation is impossible.”